The biggest college basketball game of the weekend will be one of the first played on Saturday. 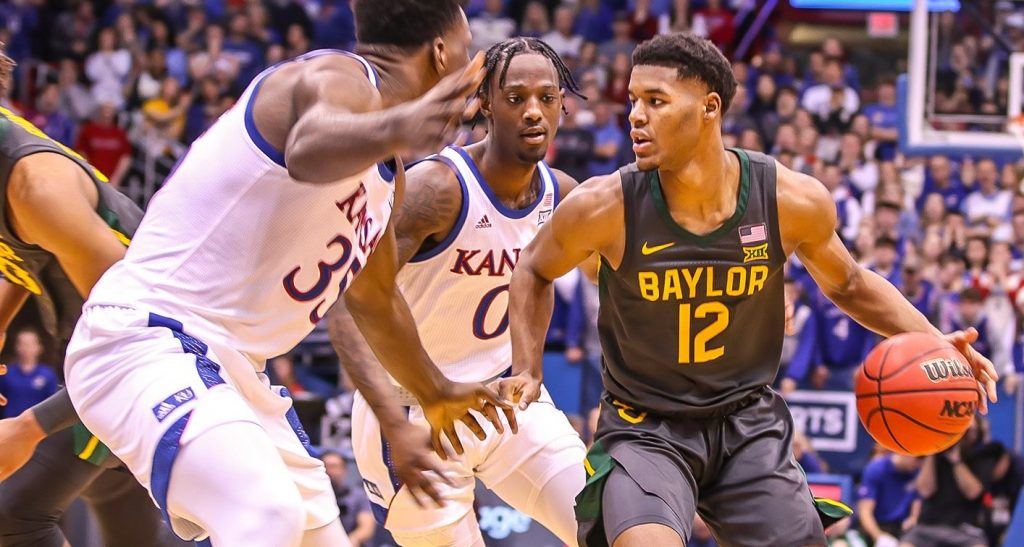 Jared Butler and the Baylor Bears will look to complete the regular-season sweep the Kansas Jayhawks when the teams play on Saturday. (Image; Baylor Photography)

That’s when the third-ranked Kansas Jayhawks face off against the top-ranked Baylor Bears in Waco, Texas before a nationally televised audience on ESPN. Tipoff is set for 11am CT.

Kansas coach Bill Self said the Baylor squad is as good as any he’s seen in the Big 12 during his 17-year tenure with the Jayhawks.

Their quartet on the perimeter can all go get their own shot,” he told reporters. “Can stretch it, and can score off two feet, which sounds kinda weird, but that means they can go late (on the shot) clock and go create on their own.”

The Jayhawks have won 11 straight since falling to the Bears last month. They’re led by Devon Dotson, a 6-2 sophomore guard who averages 18.4 points and 4.2 assists per game. Baylor held him to just nine points in their first encounter.

Not that Baylor needs more good news, but it’s possible MaCio Teague, the team’s second-leading scorer with a 14.4 scoring average, returns from a wrist injury that’s sidelined him the past two games. He and Butler are especially effective on the perimeter as they’ve combined to make nearly 37 percent of their 3-point shots (116-of-314).

Despite being at home and despite the commanding win in their previous matchup, Baylor’s only a two-point favorite at both FanDuel and DraftKings sportsbooks for Saturday’s game.

The two dominant online sportsbooks had slightly different odds on the same spread in the overnight hours. FanDuel offered better odds on Baylor at -105, while DraftKings offered the Bears at -112. The minus-sign before the number indicates a bettor would need to risk that amount to win $100.

Conversely, DraftKings offered better odds on Kansas at -109, compared to the -115 available at FanDuel.

DraftKings is also offering a moneyline on the game. Baylor is the -136 favorite straight up, while Kansas commands +112 odds, meaning a $100 bets wins $112.

According to oddsFire, 54 percent of the bets are on Baylor giving the points at FanDuel. However, Kansas represents 55 percent of FanDuel’s handle on the game.

There’s more consensus, though, on the game total. At FanDuel, the total is 127.5 points, and 91 percent of the bettors are taking the over. That accounts for 90 percent of the handle.

All odds and spreads are subject to change.

While Baylor leads the Big 12, oddsmakers and bettors believe Kansas has the better chance to cut down the nets in the NCAA Tournament.

Kansas currently has +800 odds to win the NCAA title at both sportsbooks. It the favorite at FanDuel and the co-favorite at DraftKings with Gonzaga.

Baylor is still thought of highly by the sportsbooks. The Bears are the fourth choice at FanDuel with +1100 odds. They’re the third pick at DraftKings at +1000.