President Trump on Thursday evening outlined guidelines states can use to implement a phased reopening, as the United States begins the recovery phase of the COVID-19 crisis in earnest. 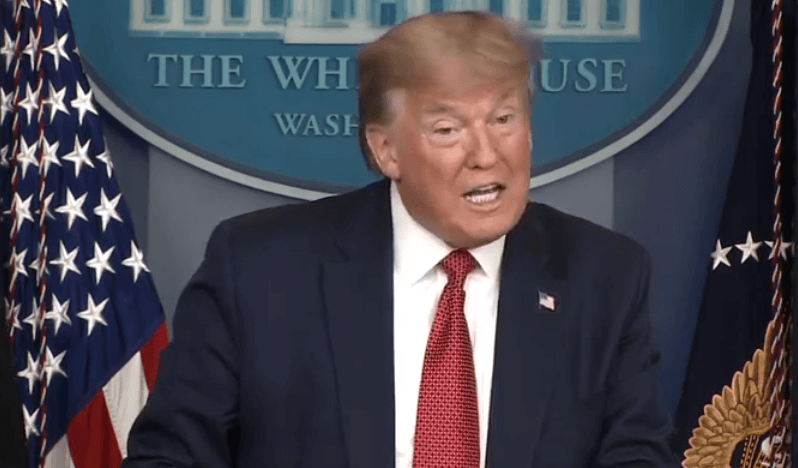 President Trump said some states may be able to start reopening plans sooner than others that have been more affected by the COVID-19 outbreak. (Image: WhiteHouse.gov)

While the coronavirus has led to an unprecedented shutdown of the country, the pandemic’s effect on some states has been different than others. As such, Trump told reporters at a White House briefing that states “that are in great shape already,” like Montana and Wyoming, could begin the Phase One recovery steps as quickly as Friday.

This is a gradual process,” Trump said. “As the caseload in a state continues to go down, restrictions can continue to be eased and come off.”

Phase One still calls for social distancing of six feet in public spaces and avoiding gatherings of more than 10 people when social distancing can’t be practiced. Large venues, such as sit-down restaurants, movie theaters, churches, and sports stadiums can operate in this phase, but only under strict social distancing guidelines. Bars, however, should stay closed.

In Phase Two, non-essential travel can resume, and gatherings, when social distancing is not feasible, can be expanded to 50 people. However, employers are urged to close common areas and still encourage feasible remote working options. Bars can open, but with diminished, standing-room-only capacity.

Phase Three allows vulnerable populations, such as the elderly and those with serious health conditions, to go out in the public. But those individuals need to maintain social distancing practices. Others, though, should consider “minimizing time spent in crowded environments,” according to the guidelines.

“Continue to adhere to state and local guidance, as well as complementary CDC guidance, particularly with respect to face coverings,” the guidelines state for all phases.

The entire plan can be found here.

No Timeline for States

What the guidelines mean for the gaming industry is unclear, since casinos, bingo halls, and racetracks weren’t specifically mentioned in Thursday’s briefings. However, even in states that can begin recovery phases as early as this week, it’s unlikely many gaming venues would be able to operate effectively during the Phase One period.

Before casinos closed last month because of the COVID-19 outbreak, some tried implementing social distancing practices, including limiting the number of players at table games. Others increased the number of hand sanitizing stations, or closed every second slot machine or electronic table game in a row to prevent people from gathering.

The White House guidelines propose a gating system for states to enter into and proceed through, and while that system proposes states use a 14-day period of downward trends to use as metrics for shifting between phases, Dr. Deborah Birx, the administration’s Coronavirus Response Coordinator, told reporters that’s not set in stone.

“We did not put a timeline on any of the phases,” Birx said. “We want the governors with the data that they have community by community to be setting up those timelines.”

Not only do the guidelines let the states make the call on going through the phases, including adjusting it by cities and regions within the state, but the federal government is also encouraging states to partner regionally in developing COVID-19 recovery plans.

That had already started to take shape before Thursday, when several Mid-Atlantic and New England states and Pacific coast states announced separate partnerships. On Thursday, a partnership between Indiana, Kentucky, and Ohio, was expanded to include Illinois, Michigan, and Wisconsin.

Prior to Trump’s briefing Thursday, Ohio Gov. Mike DeWine announced that he wanted to see the Buckeye State start reopening on May 1.

“It’s going to be gradual – one thing after another,” the Republican leader tweeted. “We want to do this in a thoughtful way that engenders confidence and ensures customers and employees are safe.”

As of Thursday night, there are 671,349 confirmed COVID-19 cases in the US, according to the Johns Hopkins University of Medicine Coronavirus Research Center, with 581,827 considered active cases. While 56,236 have recovered, the virus has led to 33,286 deaths.