Over the weekend, Santa Anita Park saw two more horses die at the southern California track, bringing the number of fatalities to 36 since last December. The latest incidents come, though, less than a week before it serves as host of the Breeders’ Cup world championship races. 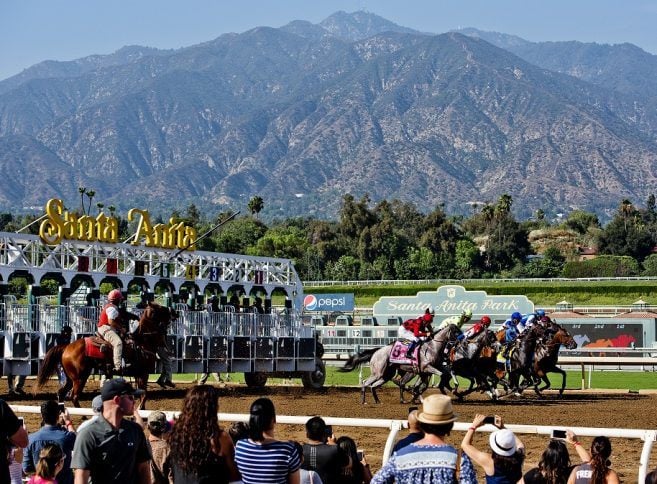 Two more horses died at Santa Anita over the weekend. That raises the number of fatalities at the California track to 36 since December. (Image: Santa Anita)

On Sunday, Bye Bye Beautiful was put down after the day’s third race. The 2-year-old filly, racing for just the second time, was pulled up around the half-mile pole by jockey Tiago Pereira. After she was loaded into an ambulance, an on-track veterinarian diagnosed the filly with a broken right leg. Because of the severity of the injury, the decision was made to euthanize her.

On Friday, G Q Covergirl injured both of her front legs while training and was euthanized. Trained by Doug O’Neill, the 6-year-old mare won six times in 16 starts and earned more than $200,000.

Both horses will have necropsies completed at the University of California Davis.

Sunday’s fatality marks six deaths in the past month since racing resumed at Santa Anita for its fall meet.

Changes Made at Santa Anita

Santa Anita has become the public face for a sport that’s facing mounting pressure to make changes to protect the horses who race for their connections as well as for gamblers across the country. During the spring meet, track officials shut down racing for three weeks to inspect the racing surfaces and review the records of those horses who died.

Shortly after that, The Stronach Group, Santa Anita’s owner, announced sweeping reforms designed to eventually eliminate race-day medications for most horses and to restrict the use of the jockey’s riding crop. TSG announced the reforms would take effect at all of its tracks across the county. Several other tracks, including Churchill Downs in Kentucky and the New York Racing Association’s venues, agreed to implement the drug standards.

TSG also took action against trainer Jerry Hollendorfer, banning him from all TSG tracks after six of his horses died at Santa Anita and Golden Gate Fields. Hollendorfer is currently pursuing legal action.

Despite TSG’s efforts, the fatalities continued to mount. Some leaders expressed concern regarding the track and its ability to safely run races. Rumors swirled about the Breeders’ Cup pulling out. However, organizers decided in late June to keep the races at Santa Anita instead of looking for a last-minute replacement.

With TSG’s proactive approach, animal welfare organization PETA has praised the company for its efforts to improve conditions for horses. Still, they believe legal action is necessary to punish those responsible for the deaths.

Santa Anita has taken extraordinary measures to protect horses, but it can’t criminally investigate trainers and veterinarians for the deaths of Bye Bye Beautiful and the other horses. Law enforcement must do this,” Kathy Guillermo, the group’s senior vice president, said in a statement. “PETA again calls on the district attorney’s office to release its findings of its investigation into the deaths of the horses immediately and hold those responsible accountable. Further delay puts all the Breeders’ Cup horses at even greater risk.”

The Los Angeles County District Attorney announced it started its investigation back in April. An attempt to reach the district attorney’s office Sunday was unsuccessful.

The California Horse Racing Board (CHRB) is also conducting its own investigation. Last Thursday, the state regulatory body announced its would release its report on Santa Anita’s winter/spring fatalities in December. That report would also include recommended strategies to curb the number of deaths.

The CHRB also has issued more than 120 subpoenas as part of the ongoing investigation, which is checking to see if any of the cases broke board rules or state laws.

“If their investigations result in a complaint or complaints, the complaint(s) will be made public,” the CHRB said in a statement.