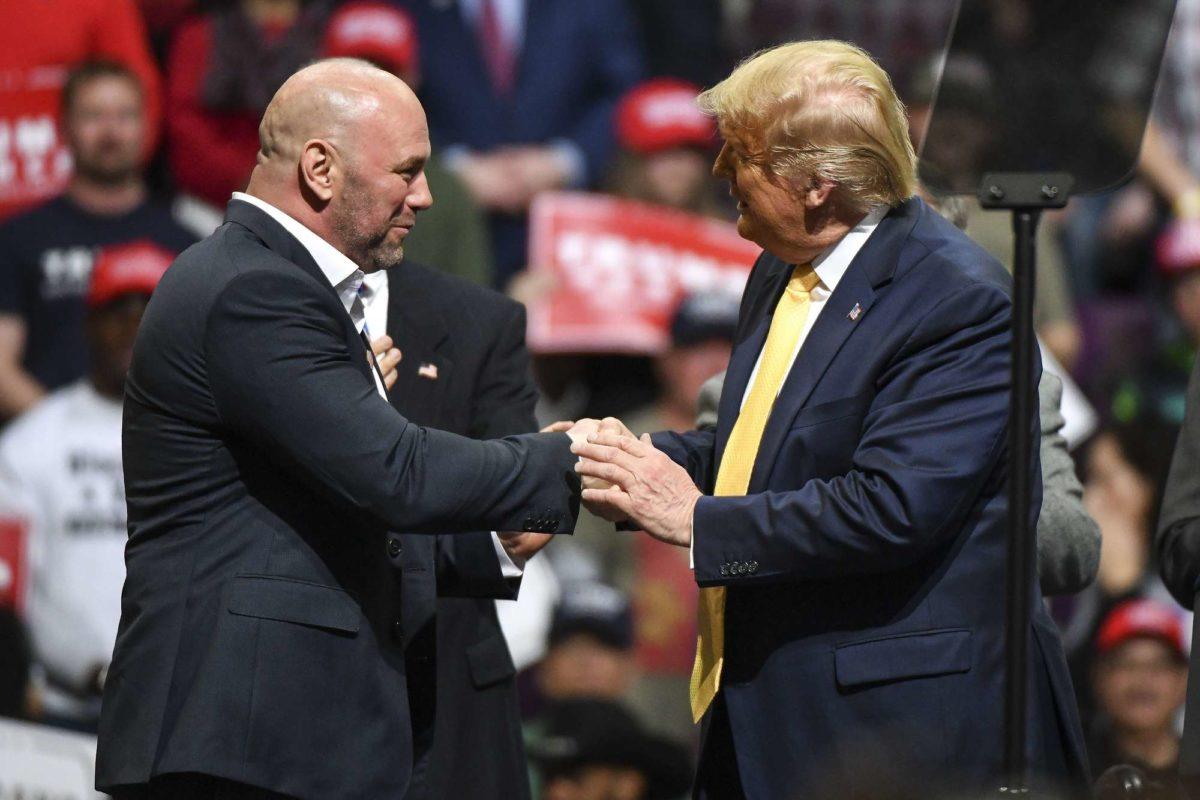 America First Action is a super political action committee (Super PAC) working to keep Trump in the White House. It’s chaired by billionaire Linda McMahon, who, with her husband Vince, owns and operates the WWE and XFL sports leagues.

White is actively campaigning for Trump, and appeared at his recent rally in Colorado. He also spoke at the 2016 GOP convention.

This guy is so loyal and such a good friend,” White said of Trump. “He’s a fighter. He loves this country. He’s doing great things for this country, and we got to win this election again, ladies and gentleman.”

White is a UFC holdover from when the MMA league was owned by Lorenzo and Frank Fertitta III – the billionaires who control Station Casinos and Red Rock Resorts.

In December, the Fertitta brothers collectively gave $1,063,000 to Take Back the House 2020, a Super PAC acting on behalf of Republican House candidates. They also gave more than $1 million to the Trump Victory PAC.

Several of Las Vegas’ richest casino tycoons are once again backing Trump and GOP efforts. Along with White and the Fertittas, in July Las Vegas Sands billionaire Sheldon Adelson and his wife Miriam gave $1 million to Security is Strength PAC, a group that defended the President during his impeachment.

Billionaire Phil Ruffin, owner of Treasure Island and Circus Circus, has given more than a quarter of a million dollars to Trump Victory, a joint fundraising committee for the President and the Republican National Committee.

Billionaire Stephen Schwarzman, whose Blackstone Group owns The Cosmopolitan and recently agreed to buy the land assets of the Bellagio, MGM Grand, and Mandalay Bay, gave $2.5 million to the Congressional Leadership Fund, a group dedicated to winning a Republican majority in the House.

As for February fundraising, bettors believe Trump will raise less than $10 million, those shares trading at 62 cents. Between $10-12 million is next at 19 cents, and $12-14 million third at seven cents.

Democratic frontrunner Sen. Bernie Sanders is expected to raise a fortune this month following his wins in Iowa and Nevada. “How much will Bernie Sanders raise in February?” has $45 million-$49 million as the favorite.

The market asking, “Will Joe Biden raise more in February than he did in January?” has “Yes” shares at 85 cents. There are no fundraising markets regarding Michael Bloomberg, as the billionaire is entirely self-funding his 2020 campaign.