The first game of the NBA regular season Tuesday night was a brutal one for those who bet on the New Orleans Pelicans. 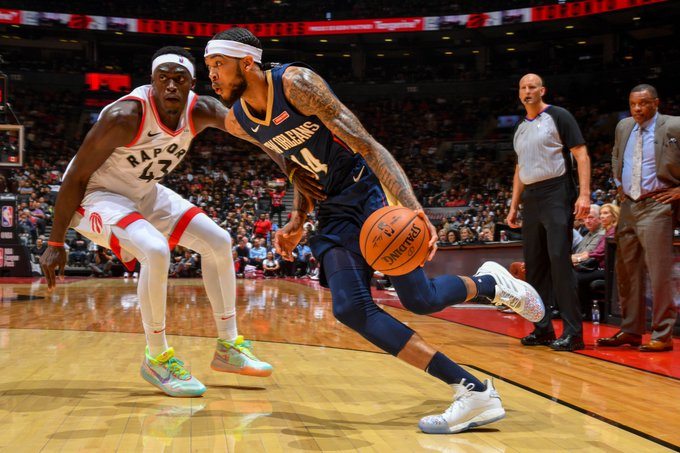 The Pelicans traveled to defending champion Toronto for a nationally televised contest. However, the game lost some of its appeal the day before tipoff when New Orleans officials announced that Zion Williamson, the favorite for Rookie of the Year, would miss up to eight weeks after undergoing surgery on his right knee.

With that bad news, New Orleans came into the game as a seven-point underdog to the Raptors at Caesars and a 6.5-point dog at PointsBet.

Despite not having Williamson, a young Pelicans team hung in with a Raptors squad that was looking to move on after Kawhi Leonard departed for the Clippers. They jumped out to an 11-point lead in the first quarter and even had a two-point lead in the final minute of regulation.

Unfortunately, the game would go to overtime, and while those who took the Pelicans and the points were probably feeling good, that feeling wouldn’t last for long as a bad beat was looming.

Raptors Pull Away in OT

Jrue Holiday’s jumper with 2:37 left in the extra session allowed the Pelicans to tie the game at 122. From that point on, though, New Orleans missed its last five shots and Toronto closed out the game on an 8-0 run to win 130-122 and cover the spread.

Unlike most basketball games, the Raptors didn’t pull away at the free throw line late.

Kyle Lowry’s 3-pointer from the wing with :56.7 left finished the scoring. It also marked only the second time the Raptors led by eight points during the contest.

“At the end of the day, they made a couple of big plays at the end that gave them separation,” Pelicans coach Alvin Gentry said. “That was the difference in the game.”

New Orleans had a couple of chances in the closing seconds to at least cover, but Holiday missed a long 3-pointer. After an offensive rebound, J.J. Redick committed a turnover with 6.8 seconds left that secured the win for Raptors bettors.

It wasn’t a losing night for all Pelicans bettors

On Wednesday afternoon, PointsBet USA announced its “Karma Kommittee” reviewed the game and decided to intervene.

The sportsbook decided to refund all pregame point spread bets placed on the Pelicans.

To lead the game with 30 seconds left and not cover +6.5 is pretty much the definition of a bad beat. We didn’t want anyone to begin the new NBA season like that. Refunding Pelicans Bettors was an easy decision,” CEO Johnny Aitken said.

PointsBet is currently open in New Jersey, where it offers a mobile app, and Iowa, where it runs a retail sportsbook at the Catfish Bend Casino at Burlington

It’s not the first time PointsBet, an Australian-based sportsbook that began taking bets in the US in January. Among the other games where its refunded bets was the NFC Championship after the New Orleans Saints lost to the Los Angeles Rams thanks in large part to officials declining to throw a flag on what appeared to be a pass interference penalty late in the game.