A former Las Vegas casino worker who spent decades in prison after being convicted of hiring a hitman to murder the wife of a Caesars Palace executive has been officially pardoned by the State of Nevada. 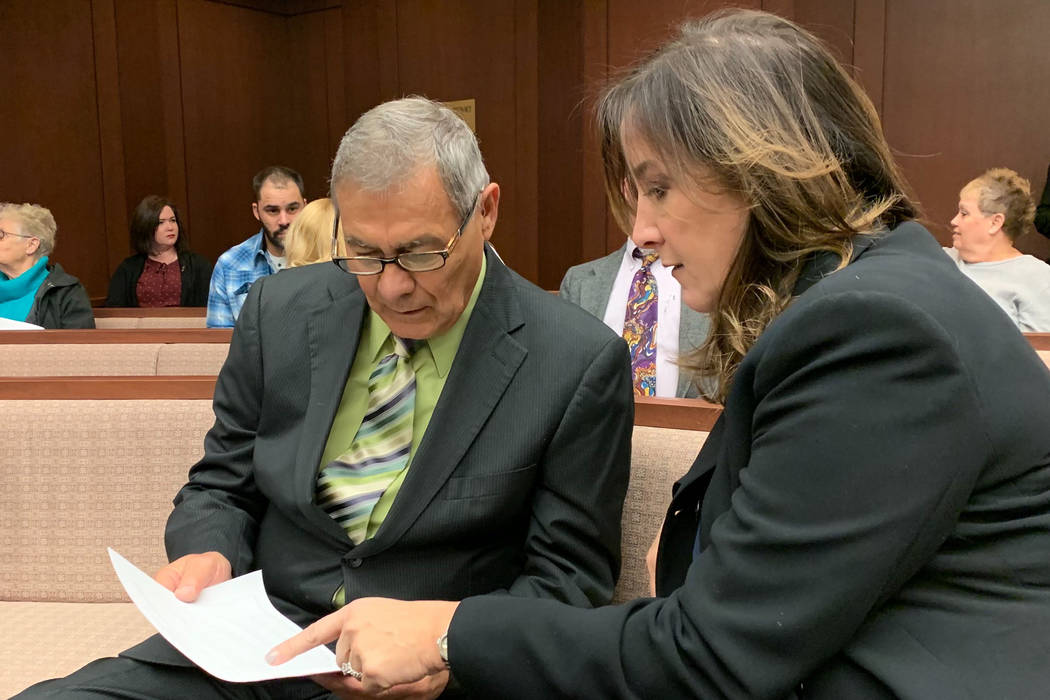 Frank LaPena always refused to plead guilty, even when doing so would have made him a free man. (Image: Las Vegas Review-Journal)

Former Hacienda bell captain Frank LaPena always protested his innocence in the shocking 1974 slaying of Hilda Krause, the wife of Marvin Krause, who managed the slots for Caesars Palace.

The Krauses were attacked in their home in the walled Las Vegas Country Club community in the early morning of January 14, 1974 in an apparent robbery.

Marvin Krause later told police he had been set upon by two Caucasian men after he opened his garage door as he prepared to go to work. He was forced into the house and knocked unconscious with the butt of a pistol.

When he came to, he found the body of his wife tied to a chair. She had been beaten, strangled, stabbed, and her throat had been slit.

Acting on a tipoff, police arrested Gerald Weakland who confessed to the murder but claimed he had been hired by LaPena and his girlfriend, Rosalie Maxwell, to kill Hilda Krause for $10,000.

Maxwell, a cocktail waitress at Caesars Palace, was having an affair with Marvin Krause. The prosecution believed LaPena concocted the plan to kill Hilda Krause so that Maxwell could marry Marvin Krause for his money, which would in turn go to LaPena.

Despite admitting to slitting Hilda Krause’s throat, Weakland was permitted to plead guilty to second degree murder in return for testifying against LaPena. He served five years in prison.

Maxwell was acquitted but, in 1977, LaPena was found guilty of first-degree murder and robbery and sentenced to life in prison without parole.

Despite serious doubts over the years about LaPena’s culpability, his name was never cleared.

In 1982, the conviction was thrown out on the basis that Weakland’s testimony was unreliable and a retrial was ordered. LaPena was a free man for seven years as the case moved slowly through the legal system.

Before the new trial, he was offered a deal to be released on time served if he pleaded guilty, but he refused. He was once again found guilty and sent back to prison.

His conviction was quashed again in 1997 and a new trial ordered, but that decision was overturned in the Supreme Court.

One of his many defense lawyers had been Oscar Goodman, later Mayor of Las Vegas, who recalled LePena had been in Mexico when the decision was reversed.

“He could have kept on going south or stayed in Mexico. They would’ve never gotten him back here,” Goodman told Thrillist in 2017.

But still insisting his innocence, added Goodman “…[LaPena] went to the police station and knocked on the door at 10 o’clock at night and said ‘I hear you’re looking for me.’ They said, ‘Who are you?’ He said ‘Frank LaPena. I hear the Supreme Court reversed my case and I have to go back to the maximum.’ They said. ‘We don’t have anything. Come back tomorrow morning.’ So Frank went home, got a good night’s sleep, came back the next day, and went to max.”

LaPena, now 81, was finally released in 2005. He since has worked as a paralegal and as an award-winning tour guide for Las Vegas’ Mob Museum.

On Wednesday, the Pardon Board — which is chaired by the governor and includes the attorney general and the justices of the state Supreme Court — voted unanimously and without question to end LaPena’s parole and fully reinstate his civil liberties.