Voters in Vigo County, Ind., on Tuesday easily passed a referendum on whether to allow a land-based casino to be built in their central Indiana community. 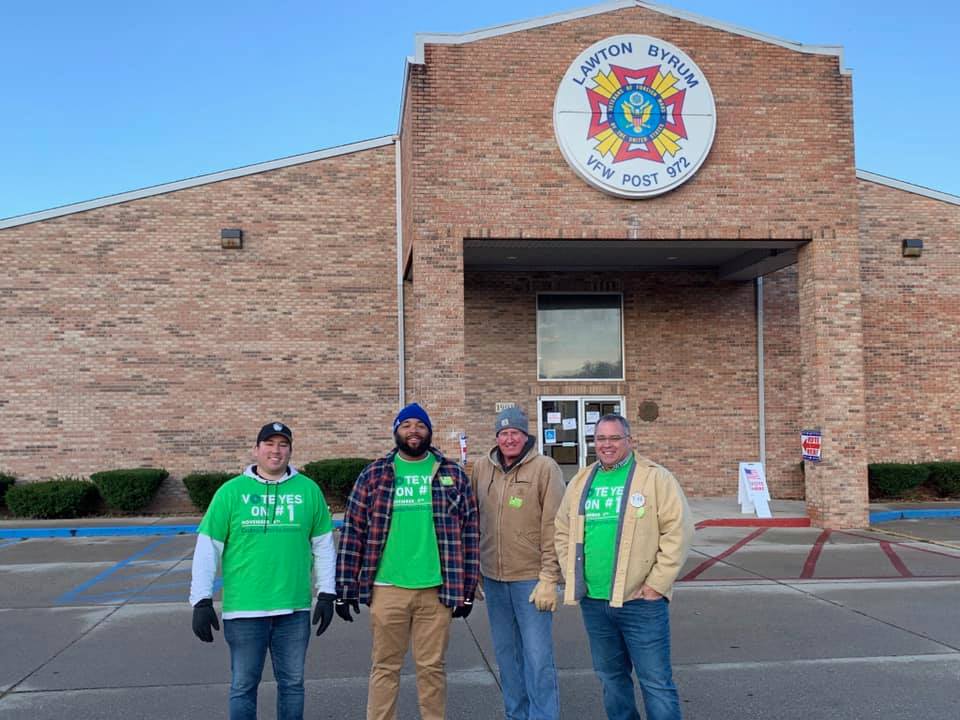 Volunteers with Vote Yes on #1 stand outside a Vigo County, Ind. polling site on Tuesday. Voters in the county overwhelmingly approved the measure allowing a land-based casino in the central Indiana county. (Image: Vote Yes on #1/Facebook)

According to unofficial results from the county’s Circuit Court Clerk, casino proponents beat opponents by an almost 2-to-1 margin. With nearly 98 percent of the 88 precincts reporting, the measure garnered 15,145 yes votes, or 63.4 percent, compared to 8,729 no votes, or 36.6 percent.

Today, Vigo County voted yes to millions of dollars in new investment and hundreds of new jobs – making a stronger economy for Vigo County,” said Vote Yes on #1, a political action committee consisting of area business leaders in support of the casino measure.

Proponents said the casino would create up to 400 new permanent jobs, pump millions of dollars into the local economy, attract new visitors, and generate almost $500,000 annually for the county’s public school system.

Vigo County is roughly an hour west of Indianapolis on the Illinois state line and home to more than 107,000 residents. The closest casino in the area is roughly 75 miles away in French Lick.

The license for a casino in the county became available thanks to an expanded gaming bill that passed the state legislature earlier this year. One of the key sponsors of that was state Sen. Jon Ford (R-Terre Haute), who represents the county.

Since the measure passed, the next move will be for the Indiana Gaming Commission (IGC) to accept proposals from companies interested in the gaming license. The IGC will accept proposals up until Dec. 1.

The license became available after Spectacle Entertainment requested permission to move its Majestic Star Casino from a Gary port to an inland location. The Commission approved that move on Aug. 28.

The Majestic Star consists of two riverboats, each with its own license. By relocating, Spectacle will consolidate its gaming operations under a single license.

John Keeler, Spectacle’s vice president and general counsel, told Casino.org on Wednesday the company is interested in the Terre Haute opportunity as well.

“We plan to vigorously compete for the license in Terre Haute,” Keeler said.

Spectacle is partnering with Hard Rock International to develop the new Gary casino, and that partnership is expected to extend to Spectacle’s proposal for Terre Haute.

Vote Yes on #1 expects whoever wins the license to invest between $100 million and $150 million in the construction project.

Competition in the Region

While the Terre Haute casino would not have any nearby competition in Indiana, it’s not the only gaming project in the region that’s moving forward.

Just 50 miles north in Danville, Ill., another community on the state line, plans are underway for a $230 million casino. Last month, representatives from Haven Gaming submitted its license application to the Illinois Gaming Board.

Once the state approves the application, a temporary casino could be up and running within nine months, Danville Mayor Rickey Williams Jr. told Casino.org last month.

For the Terre Haute casino, the Indiana Gaming Commission said it would be open to the suggestion for a temporary casino there while construction on the permanent venue takes place.