Three months later than expected, the top pick in last year’s NBA Draft is ready for his debut. 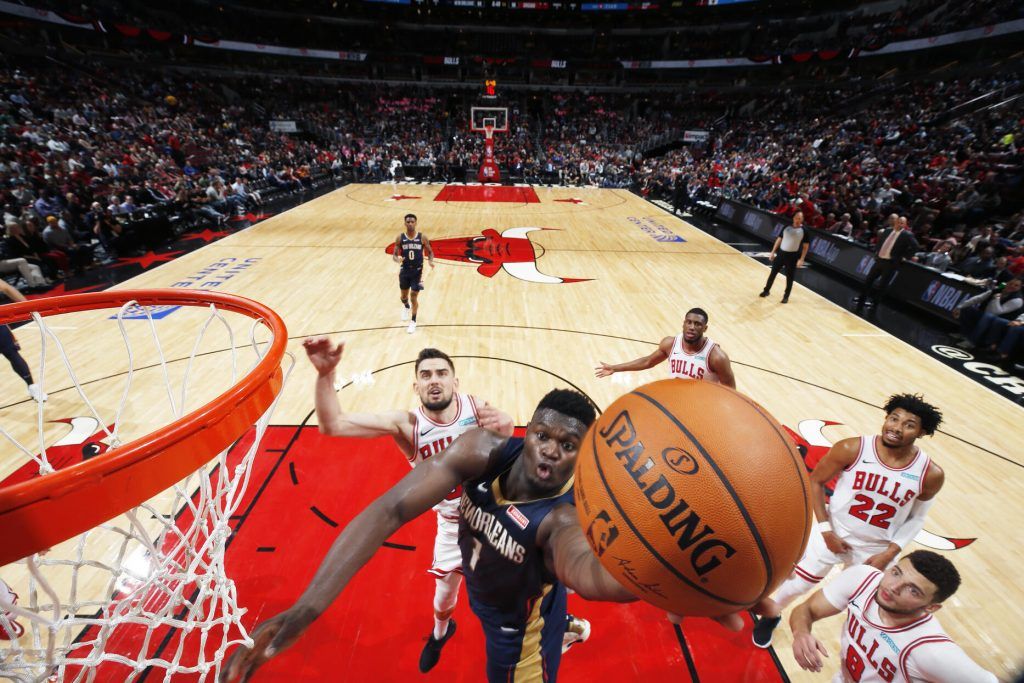 Zion Williamson goes up for a layup in a preseason game last fall against the Chicago Bulls. The 6-6 rookie forward is expected to make his NBA debut Wednesday night as New Orleans hosts San Antonio. (Image: Jeff Haynes/NBAE via Getty Images)

Technically, Zion Williamson is still listed as questionable for the New Orleans Pelicans, who host the San Antonio Spurs on Wednesday night. However, the home page of the Pelicans website leaves little doubt about Williamson’s status. Next to a graphic previewing the Spurs game is the 6-6 rookie propping a basketball on his left shoulder and wearing a slight scowl.

Williamson has been out since the end of the preseason, recovering from surgery on a torn lateral meniscus in his right knee. Initially, the Pelicans expected Williamson back in eight weeks. But rather than trying to rush a comeback in what is largely a rebuilding year, team officials opted to make sure their 280-pound forward was completely healthy.

The extra time gave him a chance to work on his fundamentals. It was frustrating, but that may end up helping the player known for his powerful athleticism reduce the wear and tear on his body. For instance, he told reporters Tuesday that when he lands now from jumping, he is no longer doing it straight- legged.

I think it does help with (avoiding) future injuries,” Williamson said. “It’s something I’ve got to continue to have less chance of getting hurt. I’ve talked with the training staff about it. It’s just consistency and sticking with the program.”

Williamson’s injury was just the start of a bad beginning to the season for the Pelicans. They won just one of their first eight games and then endured a 13-game losing streak. However, since then, they’ve won 11 of 16 and find themselves just 3.5-games back of the Western Conference’s eighth seed for the playoffs.

On Wednesday, the Pelicans will find themselves in a spot they’re not used to this season – being the favorite. New Orleans is a 3.5-point favorite over the Spurs. It’s just the 15th time through 45 games this season oddsmakers have posted them giving points. Only seven NBA teams have been favored fewer times this season.

According to TeamRankings.com, New Orleans is 7-7 against the spread as a favorite this season.

New Favorite for NBA Rookie of the Year

After being selected as the No. 1 pick in the Draft, oddsmakers were quick to tab Williamson as the heavy favorite to win the NBA’s Rookie of the Year Award. At PointsBet, he was the -450 favorite. Even when news of the injury broke, William Hill still offered him at -120.

However, while Williamson has been on the Pelicans sidelines rehabbing his knee, Memphis guard Ja Morant has been taking the league by storm. The 6-3 wunderkind for the Grizzlies is averaging 17.9 points and seven assists per game. He’s also quickly becoming a social media darling with his dunks and other flashy highlights.

Morant is now the runaway favorite. William Hill lists Morant as the -490 favorite and PointsBet is even shorter, at -625. Williamson is the second choice at both books. However. his odds are now +800 at William Hill and +700 at PointsBet.

Williamson’s debut comes as teams are starting the second half of their 82-game schedules, and at the halfway mark, the same three teams that were expected to be the main contenders for the NBA championship are still on the top of the odds board.

The Los Angeles Lakers, with LeBron James and Anthony Davis leading the way, are the favorites at both PointsBet (+275) and William Hill (+260).

At William Hill, the Los Angeles Clippers are the second choice at +275, with the Milwaukee Bucks just behind them at +300.

It’s a wide gap from there, as the next closest team, odds-wise, is the Houston Rockets. Both books list the Rockets at +900.