The Las Vegas Strip’s southern end is amid a development boom because of the forthcoming opening of the $2 billion Raiders NFL football stadium, and that’s leading some property owners to bring their valuable acreage to market. 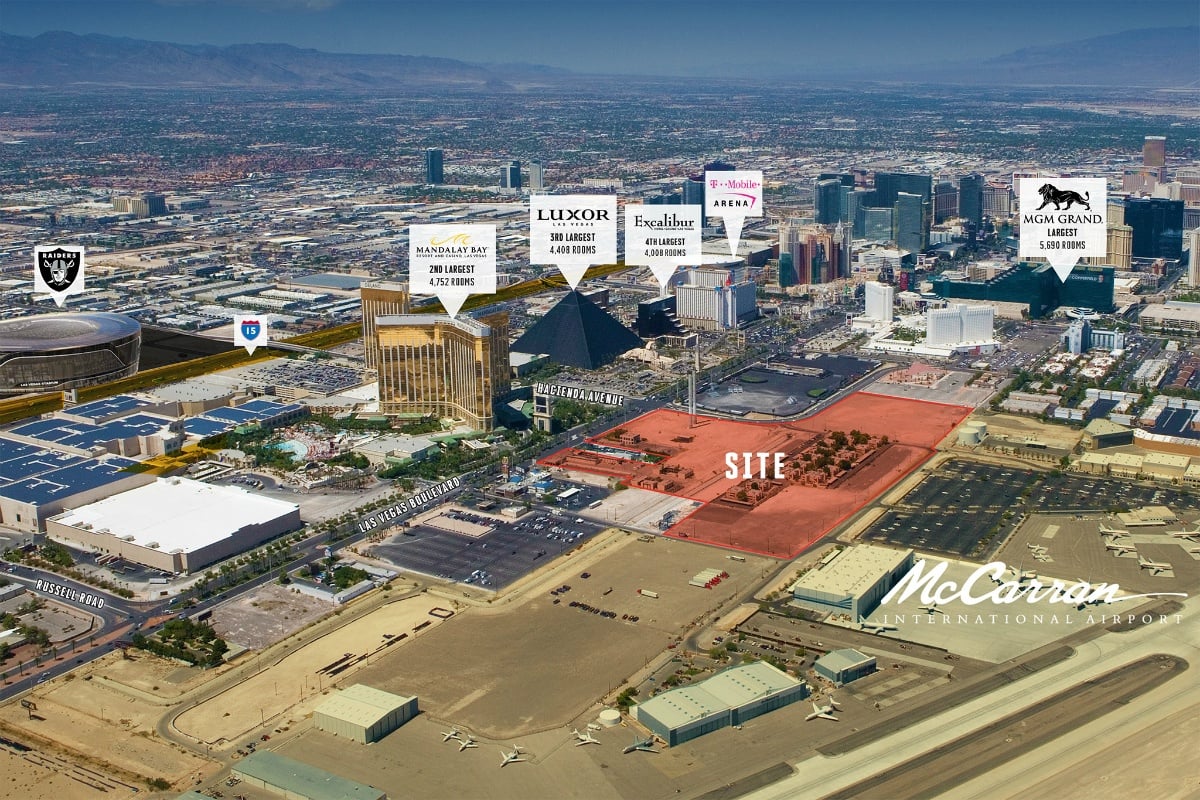 Land along the Las Vegas Strip and near the new home of the Raiders is on the auction block. (Image: DevelopTheStrip.com)

For the owners of 38.56 acres of land across from the recently sold Mandalay Bay, the seller’s market comes a few years too late.

Desert Land, LLC, Desert Oasis Apartments, LLC, and Desert Oasis Investments, LLC, filed for Chapter 11 bankruptcy protection in April of 2018. Now, their six lots (12 parcels) are going up for auction. Keen-Summit Capital Partners LLC and Colliers International are advising and brokering the sale on behalf of the trustees.

“The auction process is intended to bring about an efficient, transparent, and final sale of this property,” attorney Kavita Gupta explained. “The 12 parcels can be purchased individually or in the aggregate, with offers reviewed and considered in advance of the bid deadline.”

The bid deadline is April 30, and the auction date May 19.

“The Raiders were born in Oakland, and played 13 seasons in LA (Los Angeles). Both cities will always be part of our DNA. But today, we begin a new chapter in our storied history,” owner Mark Davis said at a ceremony attended by Nevada Governor Steve Sisolak (D).

The $2 billion, 65,000-seat domed venue near the Las Vegas Strip that will host a minimum of eight NFL games a year, plus anticipated marquee events such as the Super Bowl and College Football Playoffs, is fueling plenty of development interest.

More than 42.5 million visitors ventured to the Las Vegas metro last year, leading to gross gaming revenue (GGR) in Clark County totaling over $917.5 million – a one percent gain. Paired with the stadium, many gaming analysts are bullish on 2020. Nevada Gaming Control Board Senior Research Analyst Michael Lawtown is forecasting a 1-1.5 percent GGR increase.

With new visitors expected because of the stadium, developers are targeting the Strip’s southern end, and current landowners are hoping to cash in.

The 38.56 acres up for auction would be adequate land to build a boutique casino resort, though much smaller than the adjacent Mandalay Bay. The MGM Resorts property, which is in the process of being sold to MGM Growth Properties and Blackstone Real Estate Income Trust, sits on 120 acres, including the 11-acre Mandalay Beach.

In the middle of the land bankruptcy sits the 8 Motel. Israeli hotelier Asher Gabay purchased the 25-room roadside inn last March for $7.4 million. He’s considering razing the dated motel to make way for a 34-story, 620-room resort that could cost as much as $350 million.

The bankruptcy land and Gabay’s motel are within walking distance of the Raiders stadium. Clark County plans to close Mandalay Bay/Hacienda Avenue during NFL games and major events to allow pedestrian traffic across I-15 from the Strip.