The DC Council on Tuesday took the first formal step toward removing Councilman Jack Evans from Washington’s local legislative body. An ad hoc committee made up of the remaining 12 council members voted unanimously that Evans, who has been on the council for 28 years, should be expelled for committing numerous ethics violations. 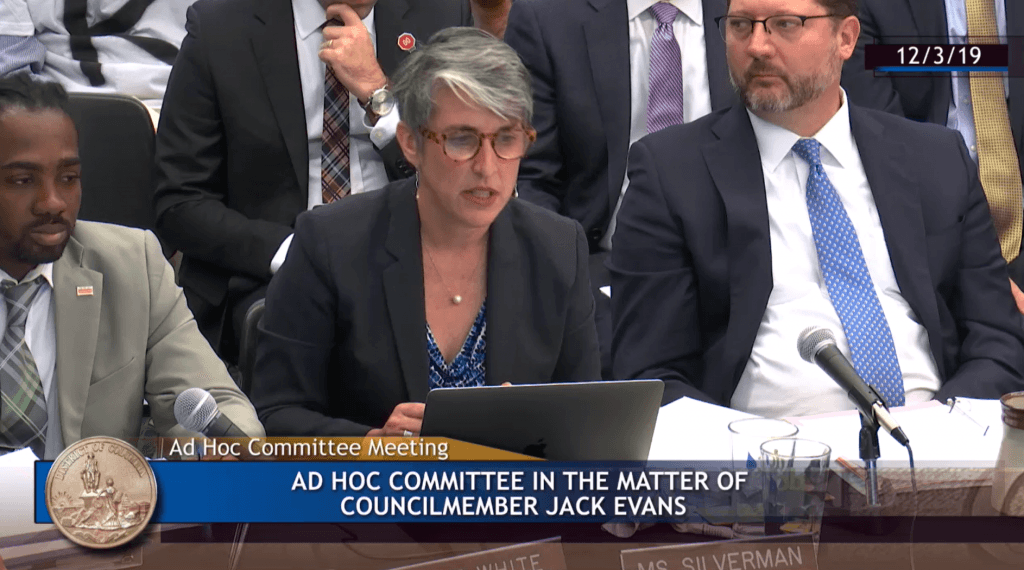 An independent investigation examined the personal business relationships Evans had with companies that hold contracts to do business with Washington’s city government. That report, which looked over a five-year period, noted several instances where Evans actions as a lawmaker benefitted his clients.

“This is about all of us,” she said. “This is about that our residents feel confident about the decisions we make are because we think it’s the right decision, not because there’s money behind that decision.”

The committee will now write up its findings and submit that before the full Council, including Evans. To remove him, 11 of the 13 must vote to do so. The committee had the opportunity to expand the investigation, but the members decided there was enough before them to initiate action.

The council’s move to oust Evans is just the latest fight he’s facing. The Democrat representing DC’s 2nd Ward is facing a recall petition in his district as well as a federal investigation into his political and business dealings.

Messages to the attorneys representing Evans were not returned on Tuesday.

It’s uncertain when the Council may take up the vote as its next scheduled meeting is not until next year. However, they may hold a special meeting before then to act.

Evans was the primary supporter of the move to issue a $215 million sole-source contract to Intralot to manage the DC Lottery’s sports betting operations. Intralot already had a contract to run other games for the Lottery.

However, critics raised questions about Evans’ ties to subcontractors Intralot selected for the sports betting operation. They asked Evans to recuse himself from voting on the contract. He declined, and it passed 7-5.

That sports betting contract now faces a challenge in a DC courtroom.

Evans Opted Out of Meeting

Evans had a chance to sit before the ad hoc committee Tuesday, present his case, and answer any questions they had. However, last week, he sent his colleagues a letter saying he felt no need to duplicate the answers he had given to investigators who prepared the report that the committee had used to recommend his removal.

Councilmember Robert C. White Jr. (Democratic-At-Large) took issue with Evans’ no-show. He said the council has been criticized for going out of its way to give Evans a chance to respond to the allegations, but every time the Council offers Evans an opportunity, his actions have made the council look foolish.

Councilmember Evans’ decision not to appear reinforces that he fails to understand the severity of his actions and how they affect the residents of the District of Columbia and this council,” White said. “It also illustrates a lack of respect for his colleagues.”

In his memo, Evans said he regretted what he has put his colleagues through. He also noted that he has closed the private law office he started in July 2016 after working for other law firms. His interpretation of the ethics rules was that his private business dealings with government contractors was separate from his work on the Council.

“In retrospect, it was not a good idea to set up my own business,” Evans said.