Rod Ratcliff has been involved in Indiana gaming for about 30 years. At the groundbreaking for his newest project, Hard Rock Northern Indiana in Gary, the chairman and CEO of Spectacle Entertainment talked about his involvement and his relationships with state lawmakers who tried to get land-based casinos in the northwest Indiana town back in the late 80s and early 90s.

He thanked them for helping guide his life to where it is now. 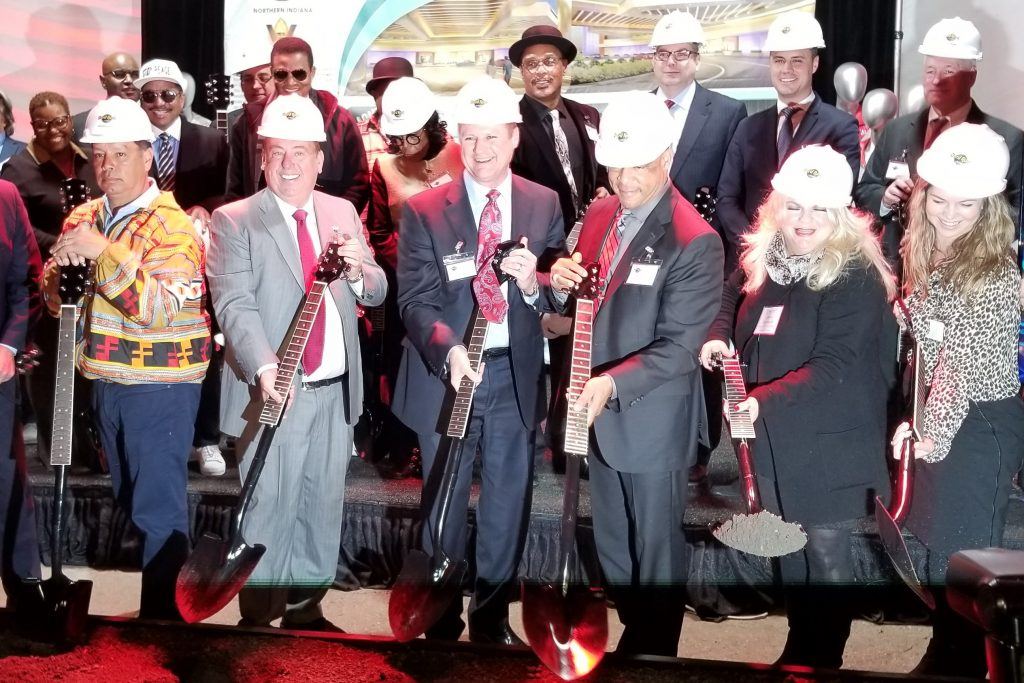 Over nearly 25 years, he’s held at least a stake in four of the state’s casinos, including both of its racetracks. Within a month, he may lay claim to a fifth casino if the Indiana Gaming Commission approves the Spectacle-Hard Rock application for the available license in Vigo County.

Last year was a monumental year for gaming in the Hoosier State. The legislature passed a law that legalized sports betting, pushed up the timeframe for the racinos to offer live table games, allowed Gary to finally get a land-based casino, and offered Vigo County voters a chance to vote for a casino – which they overwhelmingly approved.

Ratcliff told the crowd in Gary on Jan. 9 that the expanded gaming law was the biggest gaming bill state lawmakers had passed since the 1993 legislation that opened the door to riverboat gaming. So, if there’s going to be any discussion about the future of gaming in Indiana, it should start with someone who’s been there from the beginning.

In the near-term, Ratcliff told Casino.org he expects the gaming operators and the state to catch their breath and let the recently moved parts settle.

“I can’t guarantee that, but what I see, it looks like to me we’re a state that usually looks at doing something major maybe every 10-15 years,” he said. “Something major, it seems to me, was last year.”

Next Up: Tribal Compact

Still, there are some things the state needs to address with gaming in the short term. Most prominent is the tribal compact negotiations with Pokagon Band of Potawatomi Indians, who operate the Four Winds tribal casino in South Bend.

Without a gaming compact, the tribe can only operate Four Winds as a Class II casino, as opposed to the Class III casinos the state licenses. The biggest differences between the two is that the South Bend casino cannot offer table games or sports betting, and Four Winds has publicly expressed interest in having a sportsbook.

Sara Gonso Tait, executive director of the Indiana Gaming Commission, is representing Gov. Eric Holcomb’s administration in the talks with the Potawatomi tribe. In a statement to Casino.org, she said compact talks are ongoing.

Any agreement reached would need to be approved by the Indiana General Assembly. Their session is scheduled to end this year no later than March 12.

“The obligation to negotiate in good faith is mandated by federal law. As such, the negotiation process could be undermined if we were to regularly provide public updates,” Tait said. “If a compact is reached, it will undergo a public legislative process pursuant to state law, and if the parties are able to reach that point, we will be in a position to address the compact at that time.

The State and Pokagon Band have had productive compact negotiations to date,” Tait added. “However, negotiations are not complete, and a tribal-state compact has not been executed. As such and given the short legislative session, it is not anticipated the General Assembly will be asked to consider ratification this session.”

Ratcliff said Spectacle supports the move to get Four Winds a gaming compact. Four Winds is about an hour away from the currently operational Majestic Star riverboats Spectacle operates in Gary and the Hard Rock, which will replace the boats. In addition, there are three other state-licensed casinos near Lake Michigan.

Attempts to reach tribal officials for comment were unsuccessful.

Indiana state Sen. Jon Ford, who helped author the 2019 expanded gaming bill, told Casino.org he doesn’t expect to see a tribal compact hit the General Assembly in Indianapolis until next year. But he agreed that is the next gaming issue the state needs to address.

After that? It’s iGaming, he said. Last month, Michigan passed an extensive gaming bill that will bring online casino gaming to the state, and to the south of Indiana, Kentucky is discussing a sports betting bill that would also allow online poker.

In Indiana, Ford (R-Terre Haute) said there needs to be a discussion, sooner rather than later, and that includes whether that type of gaming would be iLottery or casino-style.

It’s a discussion that will likely happen in the next three to five years, he added.

“When you look at states like New Jersey, they’ve had it for four or five years,” he said. “It’s been hugely successful. Hasn’t hurt brick and mortar casinos.”

Ratcliff, too, sees iGaming coming down the pike. But he sees it, as as he noted previously, part of another major movement 10-to-15 years from now.

However, Ratcliff openly admits, he’s been off before.

“I’m the one who said there’s no way sports betting would ever happen in the state of Indiana because of the NCAA being in Indy, and three years later, it was here,” Ratcliff said.