Road teams were kings in the NFL’s Wild Card playoff games Sunday. But by winning, both the Seattle Seahawks and Minnesota Vikings will be on the road again next weekend. Those two squads already find themselves as underdogs as the playoffs advance to the Division round. 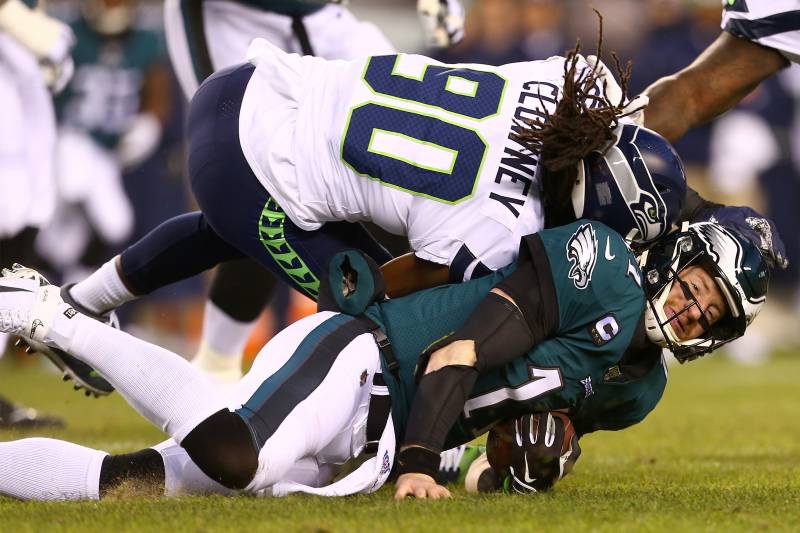 This hit on Philadelphia Eagles quarterback Carson Wentz by Seattle defensive end Jadeveon Clowney in Sunday’s Wild Card playoff game knocked Wentz out of the game in the first half and ultimately helped knock the Eagles out of the playoffs. (Image: Mitchell Leff/Getty)

The Vikings, who won at New Orleans, have a short week ahead of them as they travel to San Francisco and face the top-seeded 49ers on Saturday afternoon. Oddsmakers at FanDuel and DraftKings initially set the spread at 7 points, but within a couple hours, the spread dropped to 6.5.

Seattle will travel to Green Bay for an evening contest next Sunday. The opening line came out moments after the Seahawks beat Philadelphia, with the Packers as 4-point favorites.

The Vikings pulled a stunner Sunday, beating heavily favored New Orleans in overtime, 26-20. The Saints were a 7.5-point favorite, and their loss cost quite a few people some money. Over at William Hill, 73 percent of point spread bets were on New Orleans, which accounted for 78 percent of the handle.

Moneyline bettors were even more tilted toward the Saints, as 83 percent of the money on straight-up bets were on the Saints, despite their -430 odds.

The betting public scored a win in the Sunday nightcap as the Seahawks won a 17-9 defensive struggle over Philadelphia. The game was an even-money pick, with 81 percent of the William Hill tickets and 83 percent of the handle on the Seahawks.

Both of Sunday’s NFL playoff games featured controversial plays. New Orleans once again found itself in the middle of a debate about pass interference when some thought Vikings tight end Kyle Randolph pushed away Saints cornerback P.J. Williams before catching the game-winning touchdown. Al Riveron, the NFL vice president of officiating, told the game’s pool reporter that both players initiated contact and the replay crew saw nothing to overturn the score.

(Fox) gave us every angle that they had pertaining to the play,” Riveron said. “So, we’re very comfortable with what we saw. Nothing came through afterward that we had not seen prior to making the ruling.”

In Philadelphia, some questioned why Jadeveon Clowney wasn’t penalized for a helmet-to-helmet hit that forced Eagles quarterback Carson Wentz out of the game. Referee Shawn Smith told the game’s pool reporter that the crew deemed the helmet contact as “incidental.”

The Vikings were the big mover on the Super Bowl futures boards Sunday.

When the NFL playoff matchups were set last week, FanDuel listed Minnesota at +4000 and DraftKings offered them at +3300. After their upset win over the Saints, both books shortened their odds to +1400.

Seattle started off at +2500 at both books. FanDuel shortened the Seahawks odds to +1400 Sunday night, while DraftKings cut them to +1200.

Even without playing, both the 49ers and Packers saw their odds shorten as well. FanDuel moved the Niners from +400 to +320, while DraftKings shortened them from +400 to +325.

Odds for AFC teams can be found here.