The New Hampshire Lottery Commission announced on Tuesday that it has entered contract negotiations with DraftKings and Intralot to provide an array of sports betting services in the state. 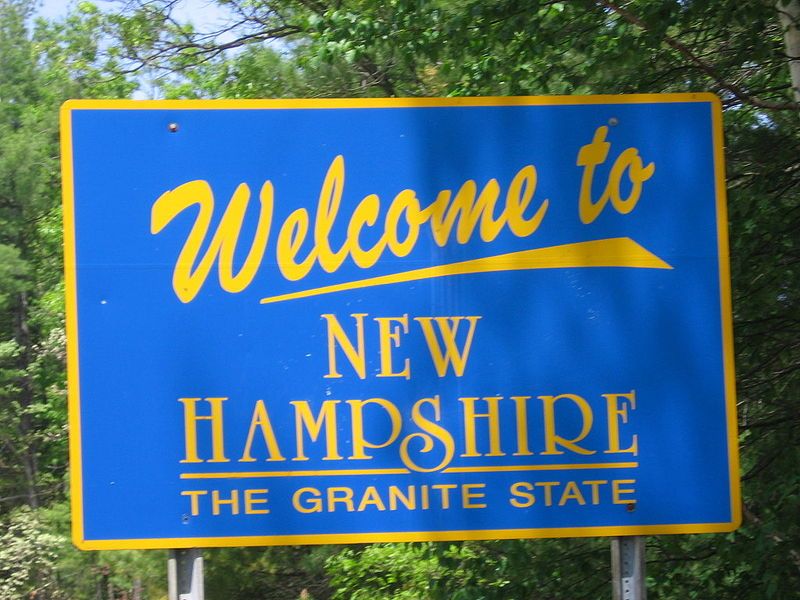 New Hampshire is getting ready to post the welcome sign to both DraftKings and Intralot after the state’s lottery commission announced it entered into contract negotiations with both companies to offer sports betting in the state. The first bet could be placed by January. (Image: Pinterest.com)

According to a statement released by the commission on Tuesday, proposals by DraftKings scored the highest for both online and retail sportsbooks, while Intralot received the highest score for the lottery channel product.

According to the Lottery’s Web site, it anticipates final approval for the contracts to take place around Nov. 20. Earlier this month, Gov. Chris Sununu said he expected to place the first bet before the end of the NFL season.

Across all three channels, the state received 13 responses to the sports betting solicitation it released in early August.

Other finalists for the mobile betting contract were Kambi and Roar Digital, the latter a joint venture between MGM Resorts International and GVC Holdings. ROAR also was a finalist for the retail channel. According to the lottery, neither of those companies are being considered for a contract at this time.

Of the four that submitted lottery channel responses, only Intralot was invited to offer a pricing proposal.

New Hampshire’s sports betting law puts different types of bets into tiers: single-game wagers, in-game wagers, and all other types of bets. Based on the law, mobile apps can offer all three tiers. Retail sportsbooks will not be able to offer in-game betting, while the lottery vendor will not offer any single-game or in-game opportunities.

DraftKings Offers Half of GGR

Based on the scoring sheet that lottery officials released Tuesday, DraftKings blew away the competition on its pricing model.

Unlike other states, which set sports betting tax rates within its legislation, New Hampshire wanted companies to offer a price proposal.

To be the exclusive mobile provider in New Hampshire, DraftKings offered 51 percent of its gross gaming revenue (GGR) to the state. Roar, in comparison, offered 20 percent. Both companies reduced their percentages if multiple online providers were selected. DraftKings offered 21 percent of GGR if New Hampshire chose up to three vendors, and 16 percent if up to five were chosen. Roar proposed 15 percent and 10 percent, respectively.

On the brick-and-mortar side, DraftKings offered 40 percent of its GGR for up to 10 retail sportsbooks, and 50 percent of GGR for combined mobile and retail. It’s unclear at this time whether that rate would apply to all DraftKings mobile bets, or just mobile bets placed within its retail venues.

Roar offered a progressive scale, up to 11 percent of GGR for up to 10 sportsbooks.

A lottery spokesperson told Casino.org there has not been any discussion on where the retail sportsbooks would be placed. However, nine cities will hold referendums next week on whether to allow retail sportsbooks in their communities.

Smaller towns will get the chance to hold a similar vote next spring.

Intralot will provide New Hampshire with 19.25 percent of its GGR from sales at lottery terminals across the state.

DraftKings ‘Proud’ to be Chosen

A DraftKings spokesperson issued a statement to Casino.org on Tuesday regarding the New Hampshire announcement.

DraftKings is proud to be selected to offer mobile and retail sports betting in New Hampshire,” the spokesperson said. “We look forward to soon providing sports fans in the Granite State with our best-in-class mobile and online Sportsbook product and welcoming them into our dynamic retail sportsbooks. DraftKings will continue to collaborate closely with the New Hampshire Lottery Commission towards our mutual goal of bringing fun, safe, and responsible sports betting to New Hampshire.”

Several companies sought both online and retail sports betting contracts. William Hill and BetAmerica both sought retail and online contracts, while FanDuel responded only to the online opportunity. None of those companies scored high enough in their technical proposals to earn invites to submit pricing proposals.

A lottery spokesperson said they have not heard from any bidder regarding a protest.

While New Hampshire is a small state with less than 1.4 million people, it is only a short drive away from a sports-rabid Boston market that’s home to more than 4 million people. Experts believe New Hampshire will be able to draw Massachusetts residents across the border, since the Bay State has not yet legalized sports betting.