An advertisement from Irish bookmaker Paddy Power that ran during the 2019 Six Nations rugby tournament violated marketing industry standards, or so says a watchdog group. 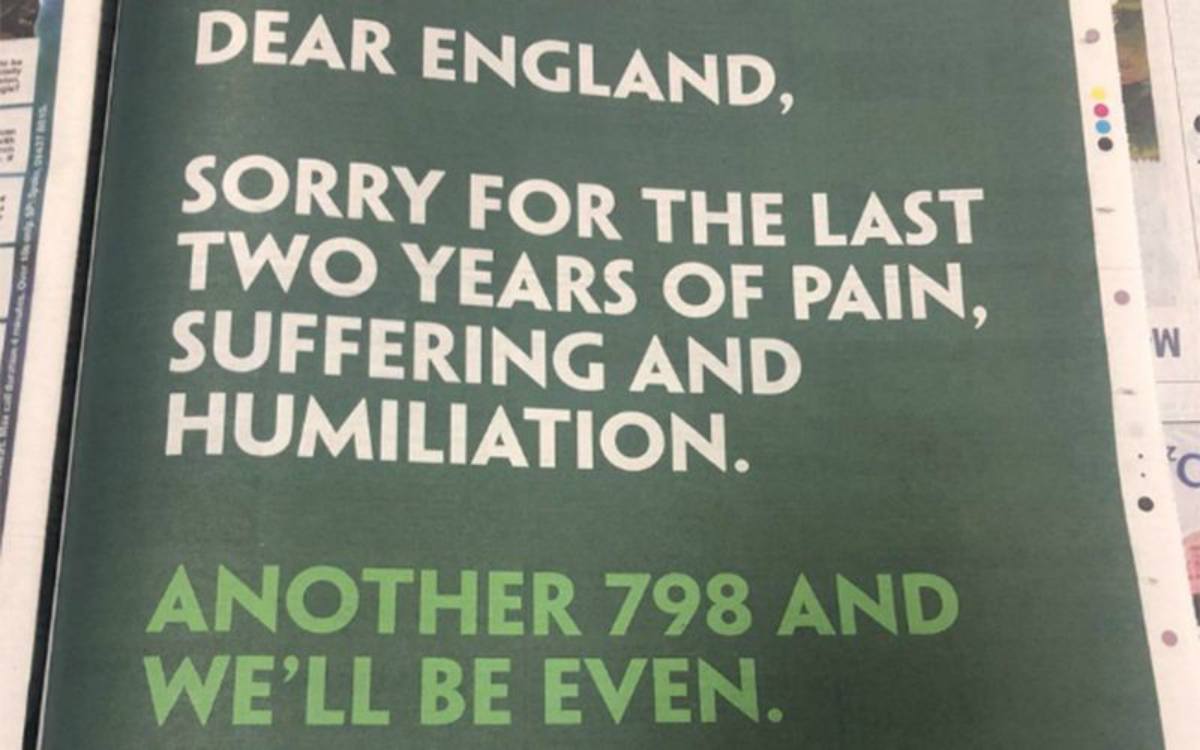 Six complaints were filed with the Advertising Standards Authority for Ireland (ASAI) after Paddy Power published an ad in the Irish Times and Irish Star in early February. The campaign was also used on the company’s social media accounts.

Dear England, Sorry for the last two years of pain, suffering and humiliation. Another 798 and we’ll be even,” the advertisement read.

The ASAI said the six complaints considered it to be “racist, offensive, anti-English in sentiment, stirring up anti-English feelings, and was both highly insensitive and bigoted towards English people.”

This week, the ASAI agreed. The watchdog agency upheld the complaints, saying the advertisement’s text “we’ll be even” was likely to cause offense. ASAI said Paddy Power’s content “was neither prepared with a sense of responsibility to consumers and to society, nor responsive to the diversity in Irish society.”

Paddy Power said the marketing spot was only in jest, and was a comical take on England’s recent poor play in rugby against Ireland over the last two years. Paddy added that the ad referenced the “publicly debated English misfortunes since the Brexit referendum.”

The UK voted by a slim majority in June 2016 to exit the European Union. The Republic of Ireland is not part of the UK, but its northern neighbor, Northern Island, is. The “another 798” refers to Ireland’s alleged 800 years of suppression under British rule.

Paddy argued the ad was simply satire and based on the friendly sporting rivalry between the two countries. The bookmaker said the spot was generally well-received, and the six complaints shouldn’t overshadow the majority of opinions.

Nonetheless, the ASAI ruled otherwise. However, since the marketing was a one-off affair, no further action was required and the issue was closed.

Paddy Power is known for ruffling feathers, and at times has certainly offended many. The bookmaker has had seven complaints upheld since 2014 by the ASAI.

In 2010, the ASAI received 400 complaints for a Paddy Power ad that showed sight-impaired footballers kicking a cat.

Paddy’s worst moment, in the eyes of many – especially Americans – came in November 2008, after Barack Obama was elected president of the United States. The bookmaker offered odds on the president being assassinated in his first term.

Following widespread criticism, Paddy Power removed the line just a day after Obama won the election. Rival bookmaker William Hill said at the time, “We have no interest whatsoever in betting on the possible death or serious injury of any politician … and cannot imagine why any reputable bookmaker would even consider taking such a bet or any punter contemplate placing one.”

Ahead of the 2016 presidential election, Paddy released an advertisement that read, “Orange is the New Black?” with a picture of Donald Trump with 3/1 odds to replace Obama.