Friday was a buzz with rumors surrounding ongoing construction at Allegiant Stadium, the nearly $2 billion venue that is scheduled to open this summer and serve as the home for the Las Vegas Raiders. 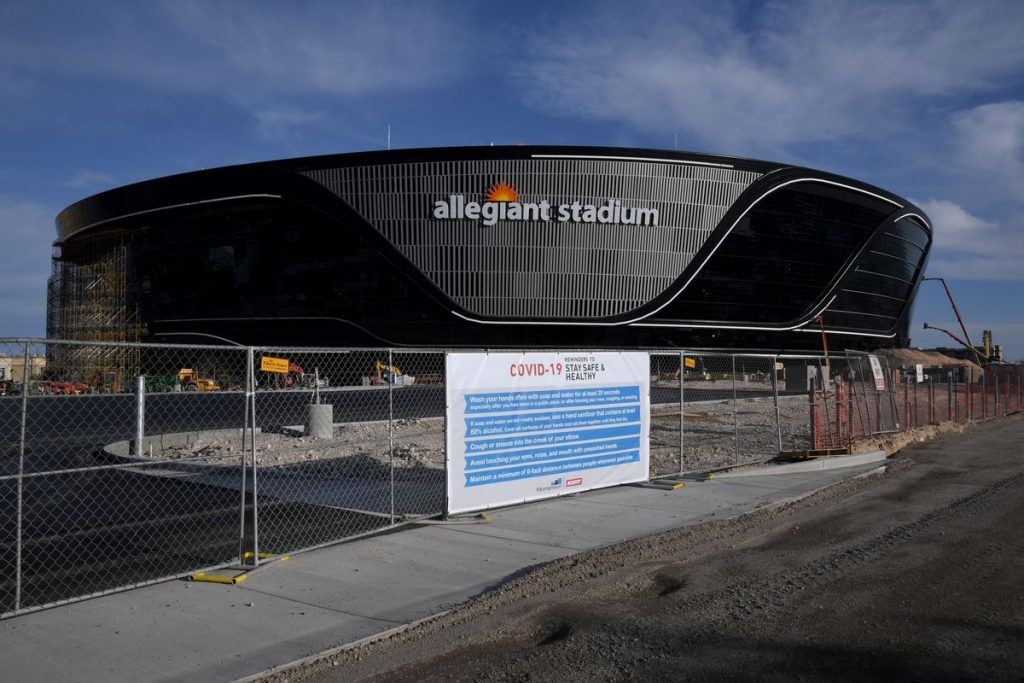 Construction continues at Allegiant Stadium in Les Vegas even with the stay-home order issued by Nevada Gov. Steve Sisolak. Two workers at the future stadium for the Raiders have tested positive for COVID-19. (Image: Ethan Miller/Getty Images)

Reports circulated online that construction had stopped temporarily due to COVID-19 with Raiders and Nevada officials possibly suspending work on the project. That came after Mortenson-McCarthy, the stadium’s general contractor, announced earlier this week that a second worker had contracted the coronavirus.

A Las Vegas labor leader quickly replied by posting pictures from the construction site to refute that report.

“If people want to see how our work is being done they can go to the live cam and witness it first hand,” Laborers Union Local 872 Business Manager Tommy White told Las Vegas-based FranchiseSportsMedia. “We have no work stoppage or slow down and we are 33 days away from completion of the roof being installed. We’re on pace to be done in July.”

While Gov. Steve Sisolak ordered casinos and non-essential businesses to close last month to help contain the spread of COVID-19, he did not extend that to construction sites. That led some to question his rationale.

He said at a COVID-19 briefing this week he’s allowing it for economic reasons.

It’s a lot of jobs that we’re looking at here. Right now I’ve got a quarter of a million people who have filed for employment,” Sisolak said. “I don’t want another 100,000 or more filing for unemployment if I can avoid it. They’re practicing increased protocols as issued by OSHA, and thus far, seem to be okay, but we’re reviewing it on a regular basis.”

Despite the governor’s approval, construction on some projects has stopped, including the MSG Sphere at The Venetian.

While construction is currently on schedule at the Raiders new digs, the coronavirus pandemic could still lead to a shutdown at the site. That could potentially derail plans for the Silver and Black to play there this year – if, of course, there is an NFL season.

According to Forbes.com, the NFL and Raiders are looking into other stop-gap options in case Allegiant Stadium isn’t complete.

One option would be Vegas’ Sam Boyd Stadium, which is owned by UNLV. However, the report also says the Raiders have San Antonio or El Paso, Texas as options as well. The team would then play its first season in Sin City the following year.

The Raiders, however, will not consider Oakland. Last month, the NFL team told the California city it declined an option to play one more season there.

According to Johns Hopkins University, Nevada has 2,604 confirmed COVID-19 cases as of Saturday morning. Of those, 2,144 are in Clark County, home to Las Vegas. Of the 102 deaths from the virus in the state, 75 have been in the county.

Already the COVID-19 has affected the Raiders first season in town. Las Vegas was due to host the NFL Draft later this month on the Las Vegas Strip, but like every other major sporting event, that was canceled, too.

The NFL, though, is looking to bring the player-selection event to Vegas, perhaps as early as 2022. The league is also considering awarding an upcoming Super Bowl to Allegiant Stadium.