A day after Super Bowl LIV, another big American event takes place. On Monday, the Iowa caucuses will formally kick off the 2020 US presidential election as, after months of debating and campaigning, candidates will start receiving delegates. 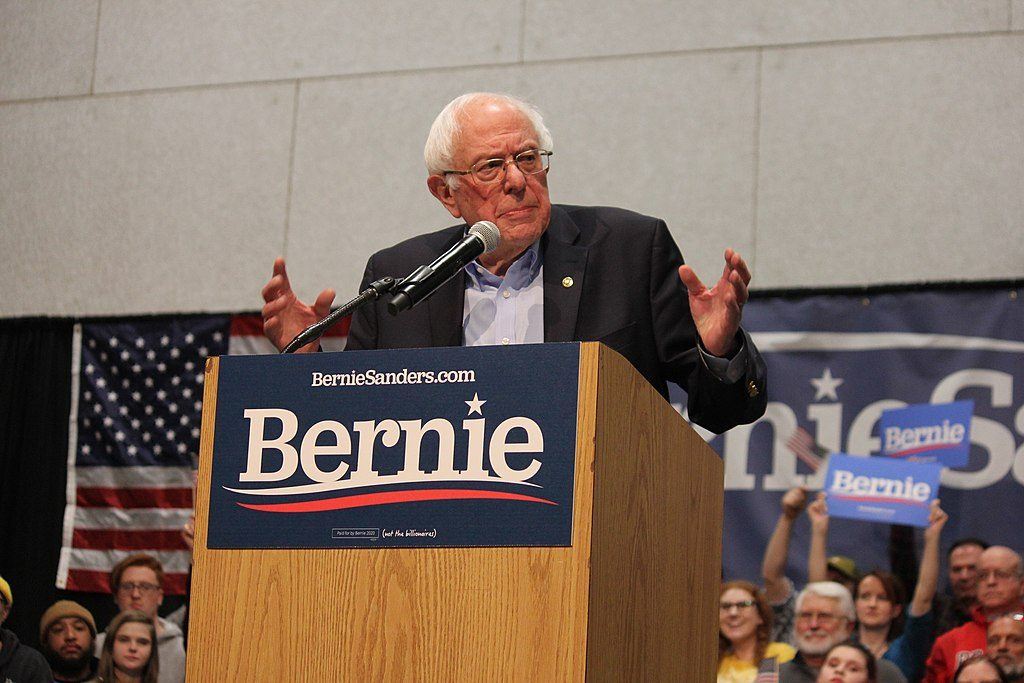 Bernie Sanders, seen here campaigning in Iowa, leads in polling as the state will hold its caucuses on Monday. (Image: Matt Johnson/Wikimedia)

But unlike the Super Bowl, betting on politics is limited in the United States. Odds are available at offshore sportsbooks, as well as in Great Britain, where betting on a parliamentary election is considered no different than betting on a Premier League soccer match.

As more American states start to accept sports betting, is it possible that they’ll eventually embrace political betting too? Officials from FanDuel and DraftKings certainly hope so.

If he could put odds on whether US states would allow political betting by the 2024 presidential election, Johnny Avello, DraftKings director of sportsbook operations, told Casino.org that he’d make it close to a pick ’em bet.

It’s a huge market, especially for the presidential race,” Avello said. “You can book it for a long time… If you go back and look at the last election, where one party looked like they were a big favorite and the way it ended up. There was volatility throughout for a couple of years. I think it’d be a great booking opportunity.”

It’s an opportunity that might require some states to rewrite their laws. In particular, the first two states on the election calendar, both of which also allow sports betting, would need to go back to their legislatures.

Not in the Law

In New Hampshire, which will hold the first primary on Feb. 11, a state lottery spokesperson told Casino.org the current law only “allows for betting specific to a sporting event.”

Iowa’s law, too, only authorizes sporting events. Brian Ohorilko, the administrator for the Iowa Racing and Gaming Commission (IRGC), said the IRGC probably could make a change if someone presented a compelling case.

“With that said, it appears that Iowa law clearly excludes wagering on the caucuses and Oscars,” he added.

Other states, though, allow betting on non-sporting events, like the Oscars. Indiana and New Jersey have already approved betting on Sunday’s Academy Awards, and their gaming commissions could approve political betting.

In some ways, you can argue Americans already gamble extensively on politics.

Casino.org asked Alex Keeney, a sharp-witted blogger who posts on Star Spangled Gamblers as Keendawg, about the future of political gambling in the US.

The most biting and cynical way to answer that question is, we have a long tradition of betting on politics in this country,” he said. “You just usually have to be a rich guy with a 501(c)(3) and a mailing address on K Street.”

While Keendawg loves to talk about the convergence of politics and gambling, he’s not sure it will be as big here as traditional sports betting.

But it can still have an impact.

“I think talking about politics in a purely outcomes-related way just unlocks a whole form of communication and discussion that you can’t do anymore,” he said. “You can’t go on Fox News and say that the president’s dumb. And you can’t go on MSNBC and the New York Times and say that it’s a bad idea to pick Stacy Abrams to be a VP nomination. That whole business is driven by people’s approval. It’s not driven by what’s actually happening.

“So, I think by taking that conversation and putting it in a casino instead of in a newspaper building or a government room, you can just have fun again. You can be frank, and you can be honest again. And you can create a game that rewards the best answer. So that’s what I think is exciting about it. I think that that’s what people who participate in political gambling think is exciting about it. But it’s not as simple as just, ‘I like my hometown team. I’m going to take the over for the Chiefs or the Seahawks or the Colts.’ It’ll always be less accessible because of that, I think.”

The one legal way to bet on politics in the US is to have an account on PredictIt. While it’s based in Washington, DC, federal officials assured the firm it will not pursue legal action, since PredictIt’s stated mission to offer markets for research purposes.

For Monday’s Iowa Democratic Caucus, shares on Bernie Sanders’ candidacy were trading at 69 cents. Joe Biden is second at 23, with Pete Buttigieg at a dime and Elizabeth Warren at seven. Shareholders will receive a dollar for each share they own in the winning candidate. So, if you bought 100 shares of Sanders at 69 cents each, you’d win $31.00 if he wins the caucus.

Sanders also leads the race for the Democratic nomination at PredictIt. His shares there are at 44 cents. Biden is at 27, with Michael Bloomberg at 17. No other candidate is trading at prices higher than six cents.

For November, though, Sanders trails President Trump in trading. Trump shares for the 2020 general election are trading at 46 cents, while Sanders are at 30. Biden is at 14, with Bloomberg at 11.