A day ago, it seemed like a new era was beginning in US sports betting as FanDuel announced West Virginia had allowed it and other sportsbooks to offer wagering on the 2020 presidential election. Less than 24 hours later, though, that all ended as state political leaders roundly criticized the move, triggering an apology from the head of the state lottery. 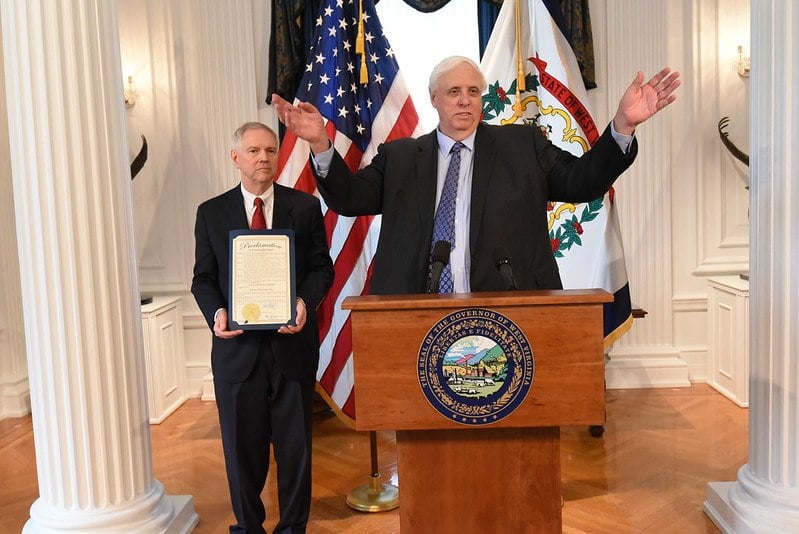 West Virginia Gov. Jim Justice, seen here at a 2017 press conference, said Wednesday it was “ridiculous” that the state lottery allowed a sportsbook to post odds on the 2020 presidential election. A few hours later, the lottery director issued an apology. (Image: WV.gov/Flickr)

In an emailed statement Tuesday evening, West Virginia Lottery Director John Myers said that Gov. Jim Justice’s office had not been notified about it. Within a couple of hours after FanDuel first posted its odds on the race, the online book took it down as the state said it needed to do more research.

I thought it would be okay, but after review, it was clearly a mistake,” Myers said. “We just screwed up. I didn’t have the authority to do it, it should have never happened and I apologize to everyone.”

The Lottery’s statement doesn’t say political betting won’t be approved, but it seems as likely at this point as a Bernie Sanders-Hillary Clinton Democratic ticket for November’s presidential election.

When asked about political betting during his Wednesday afternoon daily COVID-19 briefing, Justice called the idea “absolutely ridiculous” and said officials shut it down as quickly as possible.

“I mean I thought it was just something that people were just fantasizing about,” the Republican governor said. “I did not know it at all that it had been approved by someone in Lottery until about 15 minutes ago, to tell you the truth. It will be addressed. It will be addressed very sternly.

Justice, who won election as a Democrat in 2016 and switched parties less than a year later, is up for reelection this year and faces a primary fight. He faces six opponents in the June 9 race, including his former commerce secretary, Woody Thrasher.

In a statement to Casino.org, Thrasher’s campaign manager Ann Ali noted that companies that would have benefitted from political betting are all represented by Larry Puccio, a donor to the governor’s reelection campaign.

As a registered lobbyist, Puccio represents both FanDuel and DraftKings. He also represents The Greenbrier Resort, which Justice owns. The posh resort in the southern part of the state includes a private casino that’s home to a FanDuel sportsbook.

“Justice’s scheme would have directly benefitted the casino at The Greenbrier, which he refused to put in a blind trust like he promised us all four years ago,” Ali said.

In his statement, West Virginia Secretary of State Andrew “Mac” Warner noted that a state law has been on the books for more than 150 years outlawing betting on elections.

“Gambling on the outcome of an election has no place in our American democracy,” he added.

While others noted that law Tuesday’s initial announcement, the idea of political betting in West Virginia may not necessarily be that cut and dried.

When the West Virginia legislature passed the sports betting law two years ago, the bill defined a sporting event as “any professional sport or athletic event, any collegiate sport or athletic event, any motor race event, or any other special event authorized by” the West Virginia Lottery Commission, which has regulatory oversight on sports wagering.

Still, comments from Wednesday make it fairly certain that political betting will not happen in West Virginia anytime soon, and it’s not likely any other state where sports betting is legal will want to be the next to float the idea.

Some states’ sports betting laws explicitly limit sports betting to athletic events, but even in Indiana, which allowed betting on the Academy Awards, officials there have said they don’t have an interest in the concept.

To that, you can also add the New Jersey Division of Gaming Enforcement, which like Indiana Gaming Commission has allowed its licensed oddsmakers to offer bets on events outside of sports.

“DGE does not permit wagering on elections as a matter of public policy,” Leland Moore, a DGE spokesperson, told Casino.org in an email Wednesday.